Culture continues to be an important economic
driver in New Brunswick

In 2019, nominal gross domestic product (GDP) of culture and sport in Canada increased 2.6% to $63.2 billion, representing 2.9% of the total economy. The culture sector generated $57.1 billion (or 90.4%) of this amount, while the remainder was attributable to sport.

In terms of employment, the culture and sport sectors accounted for just over 772,000 jobs in Canada, up 2.2% in 2019, with nearly all provinces posting gains. Over the same period, employment for the total economy grew 2.0%.

Although the economic and social landscape of Canada is very different at the time of this release than it was in 2019, these data provide a valuable baseline to better understand the potential impacts of COVID-19 in later reference years.

Culture GDP rises in 2019, with every province and territory posting gains

Culture as a percentage of total GDP - N.B.

Culture GDP rose 2.5% to $57.1 billion in 2019. The visual and applied arts (+3.7%) and audio-visual and interactive media (+3.0%) domains, specifically the interactive media (+7.3%) and design (+4.8%) subdomains, continued to bolster the culture sector. Growth continued to be fuelled primarily by the design of software, video games, and graphics, as well as software and video game publishers. According to the digital and supply use tables, growth in Canada's digital industries has been strong over the last number of years.

Regionally, every province and territory reported gains, contributing to the increase in Canada's culture GDP.

The written and published works domain (-2.4%) recorded decreases, but these were smaller than in 2018. Since 2010, this domain has been on a downward trend, with periodicals and newspapers decreasing the most. However, in 2019, the rate of decline for these subdomains lessened, with periodicals down 4.0%, following an 8.6% drop in 2018, and newspapers down 3.6%, following a 8.5% decrease. This could indicate some stabilization within the publishing industries. Regionally, many provinces and territories recorded a similar trend.

For the second consecutive year, growth in GDP attributable to sports (+3.7%) outperformed that of culture GDP (+2.5%). At the national level, every sport subdomain posted increases, most notably education and training (+4.0% or +$92.0 million) and organized sport (+3.3% or +$65.0 million).

In 2019, employment rose 2.2% (or +16,597) in Canada's culture and sport sectors to just over 772,000 jobs. Culture jobs accounted for more than 80% of the increase (+13,395), led primarily by the visual and applied arts and audio-visual and interactive media domains, further highlighting the growing importance of digitization in the culture sector.

Regionally, culture jobs as a share of the total economy ranged from 1.8% in Nunavut to 4.2% in British Columbia. Overall, every province and territory posted job gains, except Newfoundland and Labrador, where the number of jobs edged don (-0.4%).

NOTE: Preliminary figures for 2020, which concern the economic impact of COVID-19, will not be available until calendar year 2022 and the final figures will not be published until 2024. 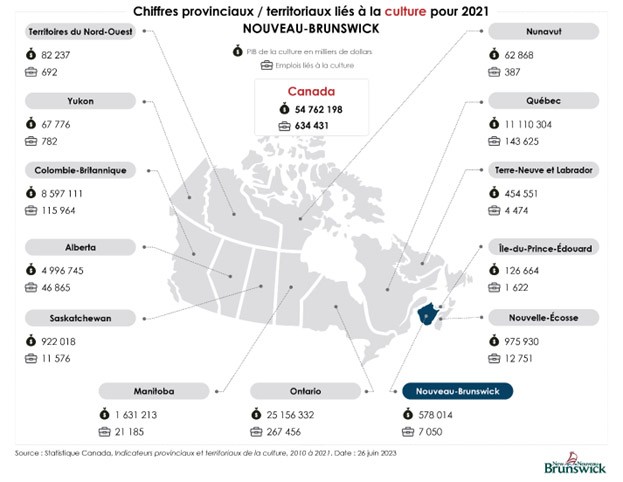 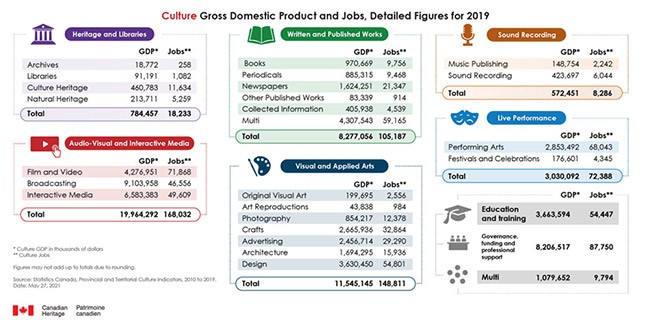 For News, Publications and Resources please refer to The Daily, which is Statistics Canada's official release bulletin, the Agency's first line of communication with the media and the public. The Daily issues news releases on current social and economic conditions and announces new products.

Statistics can be found by visiting the Culture statistics portal.

Resources - Status of the Artist

The Task Force has conducted extensive research into models of taxation, remuneration, and labour legislation and how new strategies and best practices can mitigate the barriers and disadvantages to arts professionals.